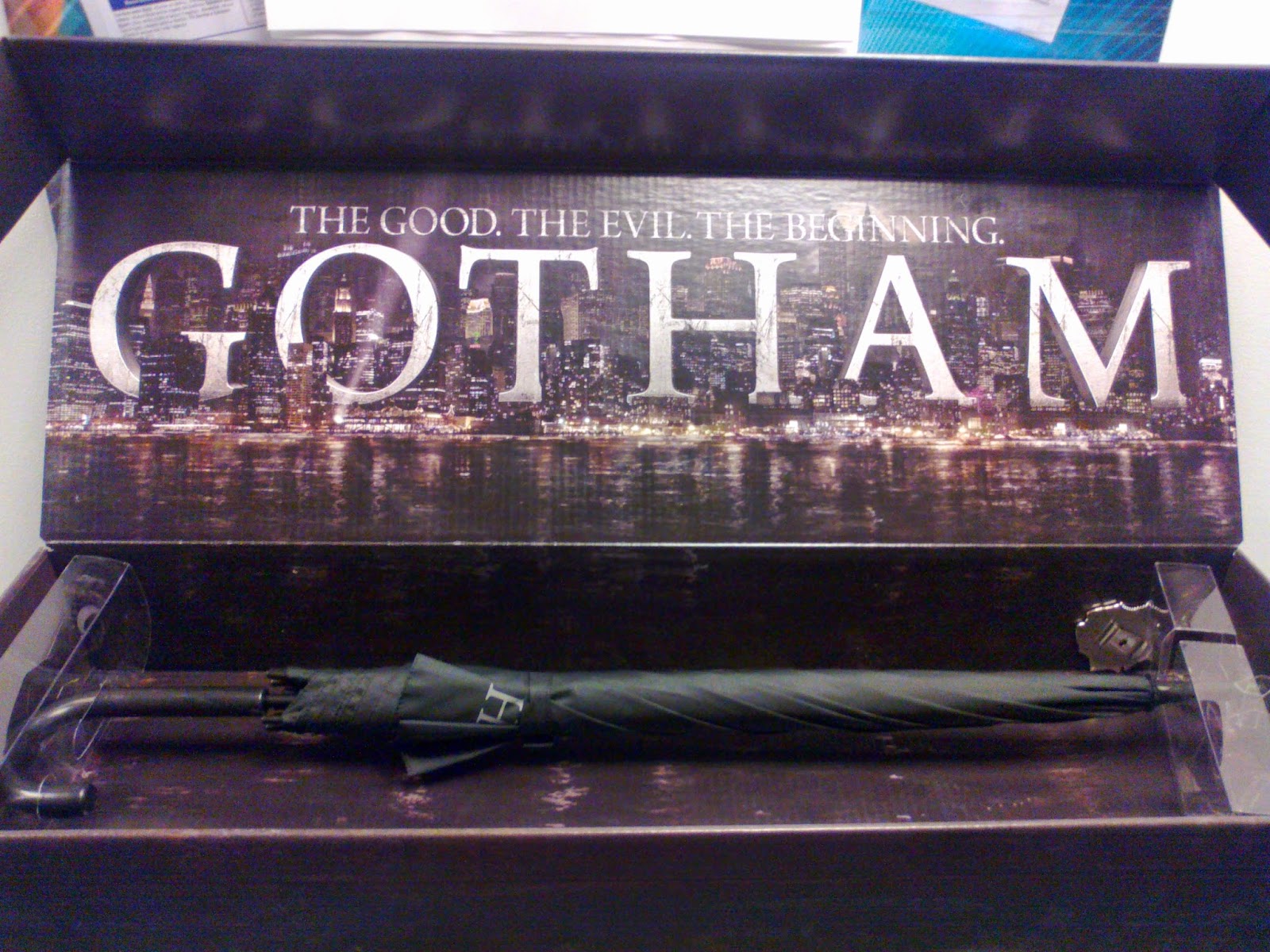 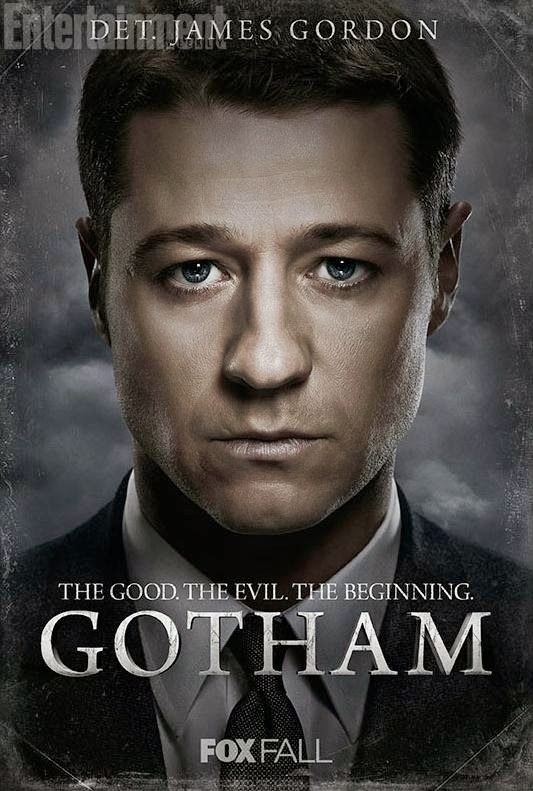 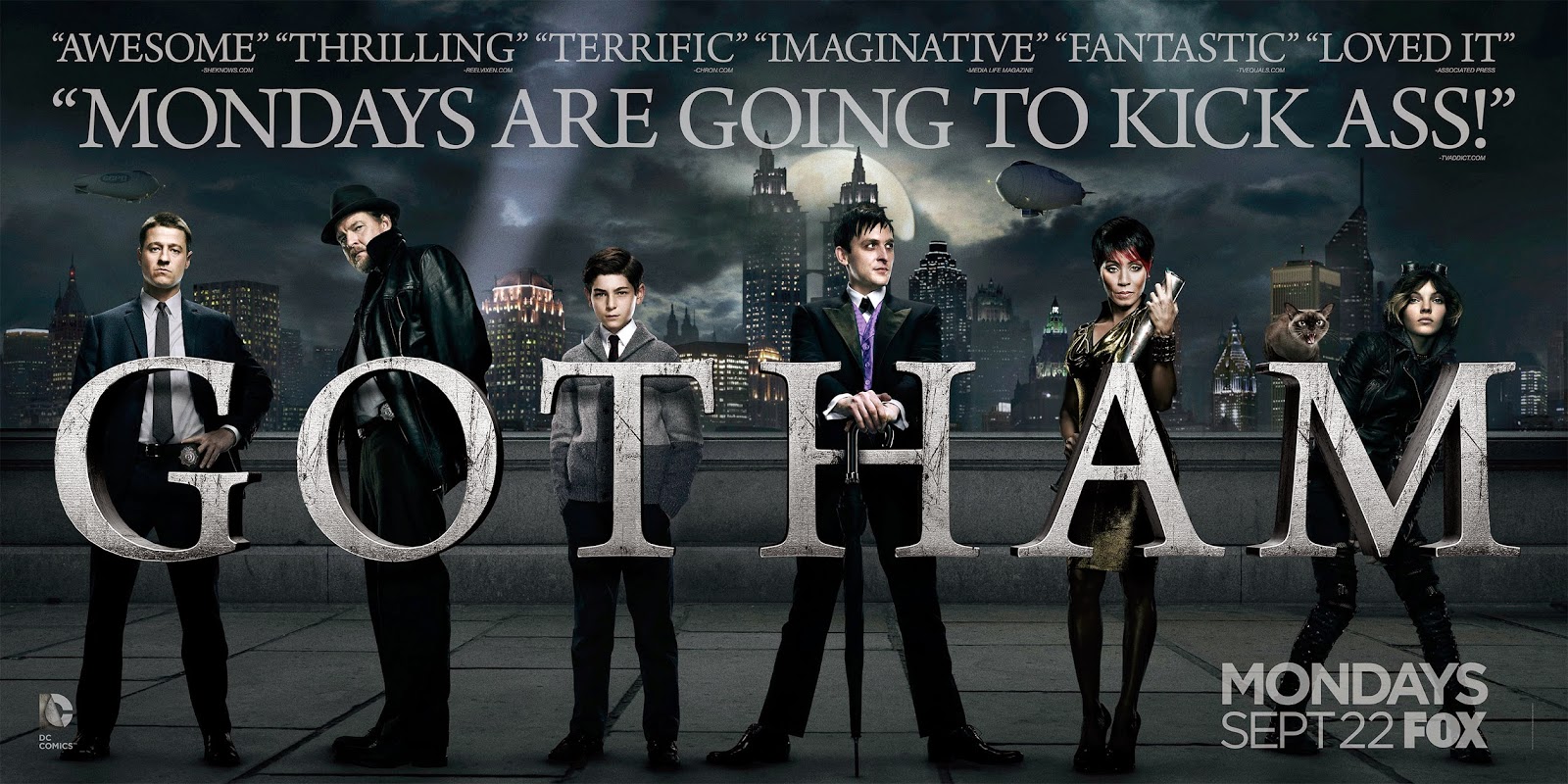 News tratta da SlashFilm.com
Next weekend, the cast and crew of Daredevil are taking over New York Comic-Con. It’ll be the first time they face the public and answer questions about the highly anticipated show, which will hit Netflix in 2015. To commemmorate the occasion, Marvel revealed a bunch of information about the appearance, along with the show’s official logo. It’s a little more sleek and modernized from the one you’re used to. Check it out below.
Here’s the new Netflix Daredevil logo: 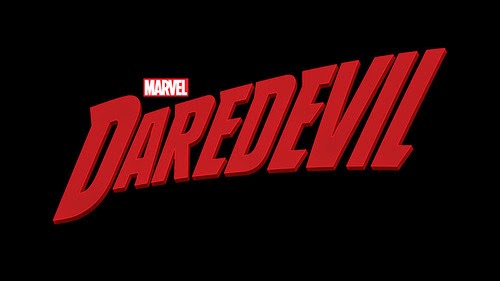 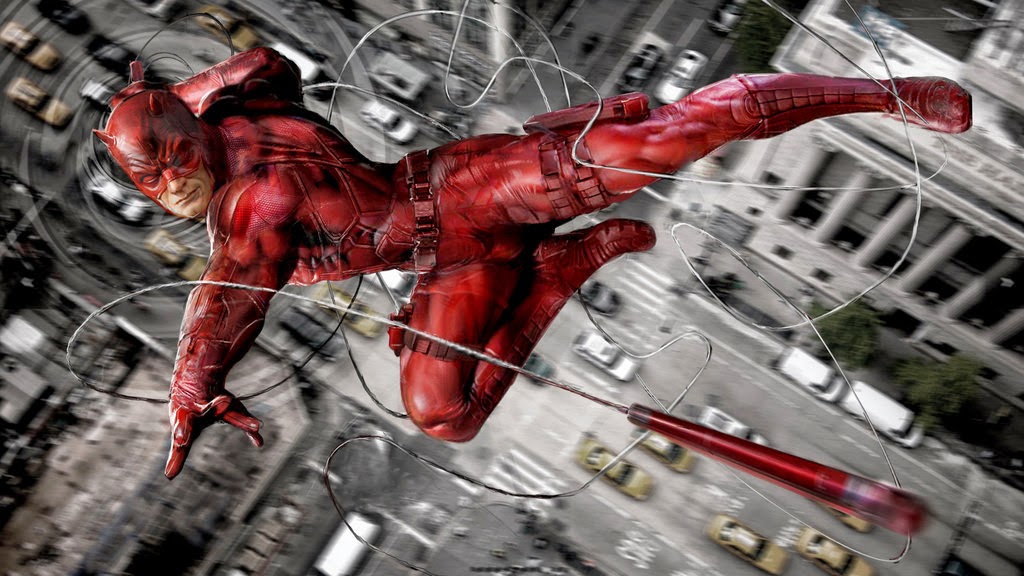 Please note: this is a ticketed event. Interested fans should arrive at the Marvel Booth when the doors open at 10:00 a.m. ET on the day of the signing to participate in a random drawing for the opportunity to get one (1) item signed by the cast.
“Marvel’s Daredevil” follows the journey of Matt Murdock, who was blinded as a young boy but imbued with extraordinary senses, now fighting against injustice by day as a lawyer, and by night as the super hero Daredevil in modern day Hell’s Kitchen, New York City.
Marvel’s first original series on Netflix is Executive Produced by series Showrunner Steven S. DeKnight (“Spartacus,” “Buffy: The Vampire Slayer,” “Angel”) and Drew Goddard (“Cabin in the Woods,” “Lost,” “Buffy The Vampire Slayer,” in addition to writing the first two episodes of “Marvel’s Daredevil”), along with Marvel TV’s Jeph Loeb (“Marvel’s Agents of S.H.I.E.L.D.,” “Smallville,” “Heroes”).
"Marvel’s Daredevil” is produced by Marvel Television in association with ABC Studios for Netflix
For more information on “Marvel’s Daredevil,” and the other exciting new Marvel Television series coming to Netflix, stay tuned to Marvel.com
Published by Leo Damerini at 17:00 Nessun commento:
Invia tramite emailPostalo sul blogCondividi su TwitterCondividi su FacebookCondividi su Pinterest
Etichette: Agents of SHIELD, Charlie Cox, Daredevil, Deborah Ann Woll, network, NEWS, Vincent D'Onofrio
TWITTER-JAM - Speciale "Twin Peaks" 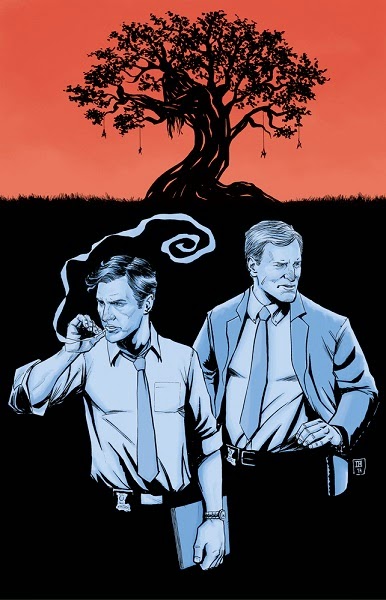 “Twin Peaks,” the ABC series that was a forerunner of today’s offbeat serialized cable dramas, is coming back to life with nine new episodes to air on Showtime in 2016.
Series creators David Lynch and Mark Frost are working away on the scripts, with Lynch planning to direct all nine episodes. The episodes are expected to bow in early 2016, which would coincide with the 25th anniversary of the show’s demise after two seasons on ABC in 1990 and 1991.
The new segs will be set in the present day and continue storylines established in the second season. Frost emphasized that the new episodes will not be a remake or reboot but will reflect the passage of time since viewers last checked in with key characters. As part of the deal, Showtime will rerun episodes from the original series’ first two seasons leading up to the 2016 premiere.
Frost would not elaborate on plot details or even the characters that will come into play. But the story threads that will picked up were “baked in to the last episode,” Frost told Variety. He called it “the next chapter of the story” and said that the passage of 25 years will be an important element in the plot.

“For those followers of the show who felt bereft when the show ended where it did all those years ago are going to like where it goes from here,” Frost assured. “And we hope that a lot of people who haven’t been to Twin Peaks yet are going to be equally interested in where the story goes from where we left off.”
“Twin Peaks” was ahead of its time in its unusual, often surreal approach to telling the yarn of a murder mystery in a fictional small town in Washington state. The show bowed with a ton of buzz — Lynch was red-hot as a feature helmer at the time — but it had little in the way of a sustained audience by broadcast TV standards of the day.
The series has remained a cult favorite over the years and thus was a ripe candidate for revival amid the general mania in the TV biz for reinventing vintage film and TV titles.
Lynch and Frost have retained ownership of “Twin Peaks” all these years. CBS has distribution rights to the show through the deficit-financing pact that Lynch/Frost Prods. set back in the day with Aaron Spelling’s Worldvision distribution arm, which CBS now controls.
Another key connection that helped the new-model “Twin Peaks” land at Showtime is the pay cabler’s Gary Levine, exec VP of original programming, who was the ABC exec who developed and championed the show during its original run.

Lynch and Frost have talked about taking another run at the Twin Peaks world over the years, but the effort got serious about three years ago when the two had one of their semi-regular lunches at Hollywood’s Musso and Frank Grill. It was not lost on either of them that “Twin Peaks” had proved to be a TV pioneer in many respects. Aspects of the show that were seen as a handicap in the ABC days are now pillars of the contempo generation of edgy cable and pay cable series.
“I always felt that in ‘Twin Peaks’ we were more or less filming a novel — drilling down to a level of detail you weren’t used to seeing in network storytelling,” Frost said. “Over the years a lot of people have credited us with inspiring them to think differently in how to tell stories. Now that we’re doing (the show) again, I’m happy to come back and get in on the action.”
Lynch and Frost didn’t shop the series around. Showtime was a natural home because of the latitude offered by pay cable, plus the comfort level offered by the connection with Levine. 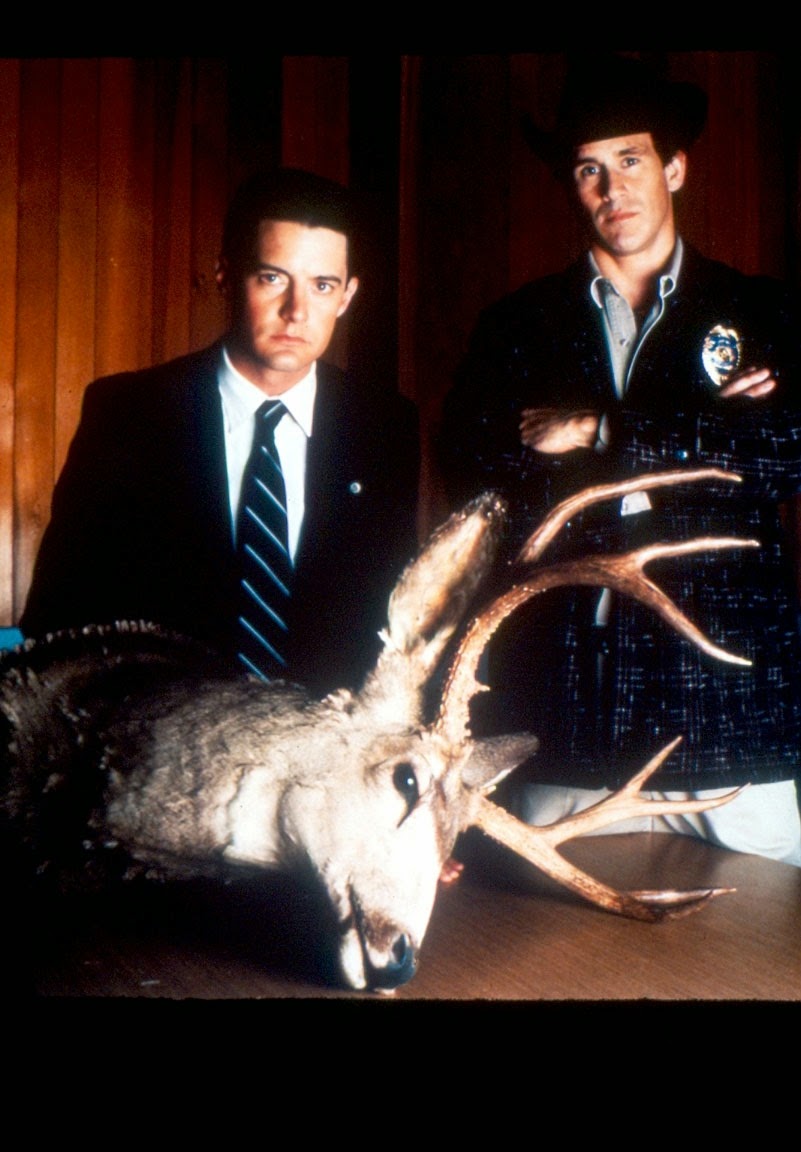 “Showtime was the place we felt most comfortable going to after meeting with Gary and (Showtime prexy) David Nevins and seeing their passion for the show,” Frost said. “Gary we consider a good friend and David I’ve known for quite a while.”
There’s no word yet about casting. In the original series, Kyle MacLachlan played the pivotal role of the Agent Dale Cooper, the FBI agent who comes to the small town to investigate the murder of homecoming queen Laura Palmer.
After that mystery was solved, the show explored even more seamy goings-on and oddball characters in the town. The pilot for the original series was shot on location in Washington state, but subsequent episodes were primarily lensed on stages in the San Fernando Valley. There’s no decision yet on a shooting location for the new segs.
Frost said it was still to be determined whether the revival will be a one-time limited series or an ongoing effort.
“The proof will be in the pudding. If we have a great time doing it and everybody loves it and they decide there’s room for more, I could see it going that way,” he said. The original “Twin Peaks” premiered on April 8, 1990, and had its last original telecast in June 1991. A prequel story, “Twin Peaks: Fire Walk With Me,” was released as a feature by New Line in 1992. 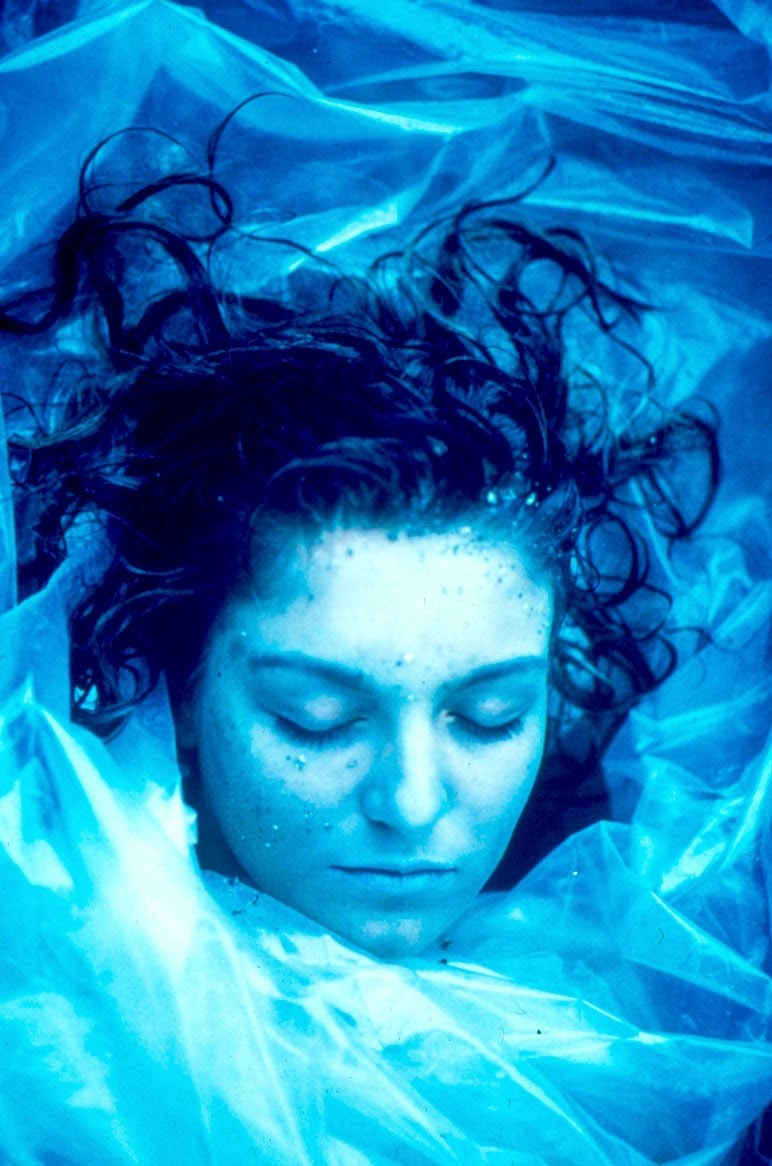 The TV series has endured for a new generation of fans through periodic homevid releases and more recently, a streaming pact with Netflix. The AFI hosted a tribute to the show in Los Angeles in July in connection with the Blu-ray/DVD release “Twin Peaks: The Entire Mystery.”
Given the show’s legacy and the rabid fandom it has inspired, Frost admitted that he and Lynch feel the pressure to make the new episodes worthy additions to the canon.
“We can’t rest on our laurels,” he said, which is a key reason why Lynch has committed to directing all nine hours.
“This show is a kind of thanks to all of the incredibly passionate fans we’ve had over the years that have kept the show alive and passed it down to the next generation,” Frost said. “We’ve been lucky enough to have one of the coolest, most intelligent, most inquisitive group of people attracted to our show. We’re happy for them that the show is coming back.”
In a statement issued by Showtime, Lynch and Frost quipped: “The mysterious and special world of Twin Peaks is pulling us back. We’re very excited. May the forest be with you.”
Published by Leo Damerini at 19:30 1 commento:
Invia tramite emailPostalo sul blogCondividi su TwitterCondividi su FacebookCondividi su Pinterest
Etichette: Aaron Spelling, David Lynch, Kyle MacLachlan, Mark Frost, network, NEWS, PICCOLO GRANDE SCHERMO, Twin Peaks, TWITTER-JAM
PICCOLO GRANDE SCHERMO - Clamoroso al CiBa-ywatch! Tenetevi stretti ai salvagente: si farà il film della mitica serie dei salvataggi "on the beach". Protagonista quel muscolo monoespressivo di Dwayne Johnson! Pronti al Bay-cottaggio se non ci saranno Pam-Pam Anderson e David Hasselhoff 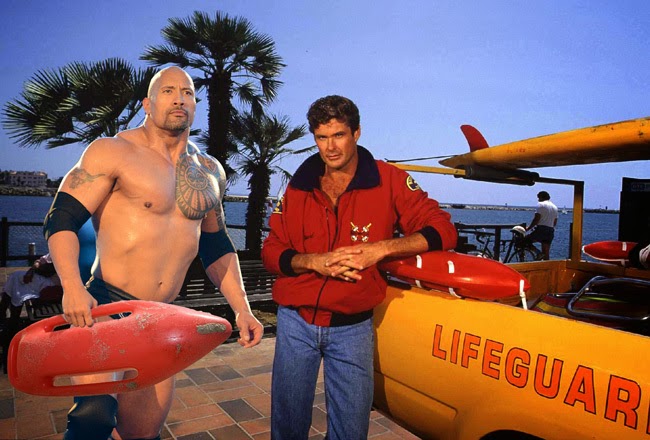 News tratta da Uproxx
SOME PEEEEOPLE STAAAND IN THE DARKNESS…. AFRAAAID TO STEP INTOOOO THE LIGHT… AND SOME PEOPLE NEED… TO HELP SOME BODY… HURREVA SURRENNGA TA FLIGGH (??)
What, you don’t know the Baywatch theme song by heart? Well, I guess you weren’t a masturbatory adolescent boy in the days before the internet. And now Paramount is trying to capitalize on the fact that idiots like me remember the Baywatch theme like it was our college fight song by making a feature adaptation. Oh, and it’s going to star Dwayne The Rock Johnson.


Paramount is moving forward with its big-screen adaptation of Baywatch and has loosely attached Dwayne Johnson for beach patrol duties. The studio also has hired Justin Malen to rewrite and has attached the hot comedy writing team of Sean Anders and John Morris (We’re the Millers, Horrible Bosses 2) to direct.
Johnson has long been rumored to head up a Baywatch movie, and the oft-shirtless star would seem a perfect fit for the action film that takes place along the perilous shores of Santa Monica.

Oh, like all it takes to be in Baywatch is the ability to look good shirtless? How DARE you. Somewhere David Hasselhoff is drunkenly eating a hamburger off the floor. The Hollywood Reporter actually got through this entire article without mentioning Hasselhoff once, which has to be a real kick to the groin for the guy who once tore down the Berlin Wall.

At one point the action was set to revolve around a series of shark attacks that led the Baywatch team to investigate a drug-smuggling operation. It is unclear what Malen’s take will be for the latest version.
Malen has become an in-demand writer after his 2011 Blacklist script Bastards became a hot comedy property. Montecito  will produce that film, and Alcon will finance. Malen also wrote the sequel to Bad Teacher for Sony, with Cameron Diaz attached to star. [HollywoodReporter]

Anyway, it’s hard to know what “loosely attached” means at this stage, or whether The Rock would be playing Mitch Buchanan or someone else. All I know is that if they need a Hobie, I’ve got two words for them: Miles. Teller.
I’LL BE READY (I’LL BE READY)
NEVER YOU FEAR (NO DON’T YOU FEAR)
I’LL BE READY
FOREVER AND ALWAYS… I’M ALWAAAAAYS HEAAAAAAARE
They damn well better do the crocodile episode.
Published by Leo Damerini at 09:00 Nessun commento:
Invia tramite emailPostalo sul blogCondividi su TwitterCondividi su FacebookCondividi su Pinterest
Etichette: David Hasselhoff, Dwayne Johnson, L'EDICOLA DI LOU, Pamela Anderson, PICCOLO GRANDE SCHERMO