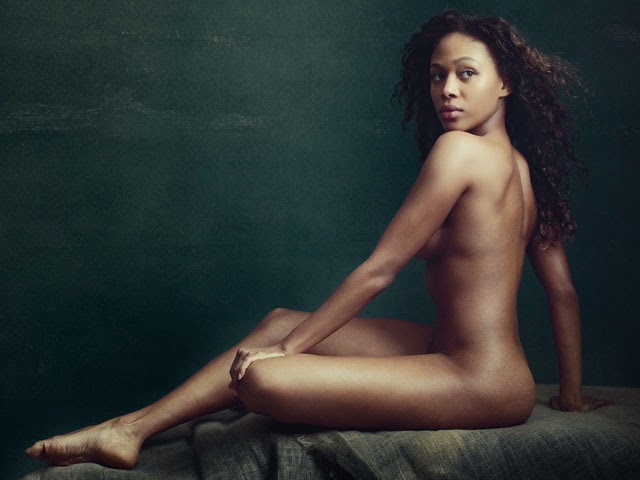 GOSSIP - Non c'è due senza tre! Anche Nicole Beharie di "Sleepy Hollow" nuda su "Allure" (dopo Laverne Cox di "OITNB" e Katheryn Winnick di "Vikings")
Nicole Beharie, 30, has experience being physical onscreen, whether in bed with Michael Fassbender in Shame or "fighting demons in the woods" in Sleepy Hollow. As for the latter: "It requires athleticism. As a woman, it's good to be able to handle your own shit."
How do you stay in shape for Sleepy Hollow?
"I run; I do a lot of dance classes; I swim; I really love lifting weights. I'll make myself do something every day, even when my heart's not in it."
What was the best part of the shoot?
"I just turned 30, and I was really nervous [about posing].... But I wanted to celebrate and accept my body in an artistic way."
Do you have a favorite body part?
"I love my bum. I have a good bum."
Published by Leo Damerini at 16:00 5 commenti:
Invia tramite emailPostalo sul blogCondividi su TwitterCondividi su FacebookCondividi su Pinterest
Etichette: GOSSIP, Katheryn Winnick, Laverne Cox, Nicole Beharie, Orange is the new Black, sexy, SGUARDO FETISH, Sleepy Hollow, toplessate, Vikings 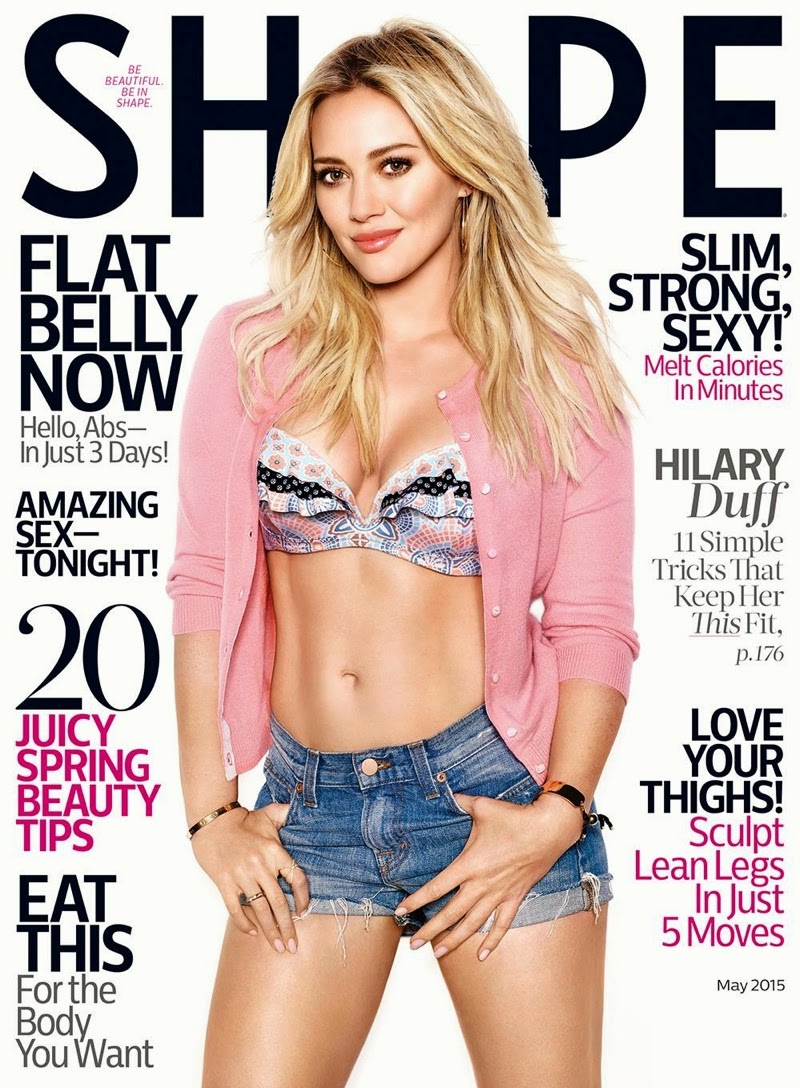 Hilary Duff ("Lizzie McGuire", "Younger") just told the world that she’s on Tinder – and going on her first date tonight! “It’s true. I’m on Tinder,” the 27-year-old actress said on the radio earlier April 28. “I was sitting with my friends one night at the house and we were joking around. In my life, I have always had really serious boyfriends. I’ve always met people through work and I have never been on a blind date. What’s the worst that could happen?”. “The whole process is wildly addicting….[I'm] talking to probably about nine guys right now,” Hilary said.
“I have my first date tonight and I’m really, really nervous,” Hilary continued. “I think some people know. You only have your first name. Some people don’t know. I think some people act like they don’t know but they do. And a lot of people are like, ‘This is a joke, right?’”. She explained what she’s attracted to in a guy. “I think the first thing is obviously looks, which sounds super vain, but that is what you first go for: natural chemistry. Also what they say in their profile has to be funny. I don’t want to see a shirtless, mirror selfie. That is instantly a left. I don’t know. Someone who looks like they like to do fun things and someone who can make you laugh in their profile. My profile says: Let’s eat pizza. I’ve had a lot of convos because of that.”
And if the date goes south, she said, “Hopefully the bathroom window will be big enough to crawl out.” In all seriousness, she said, “I’m too nice…I’ll stick around.”
“We’re going bowling, so it can’t be too expensive. I like that. I’ve never dated just a total normie,” Hilary added. 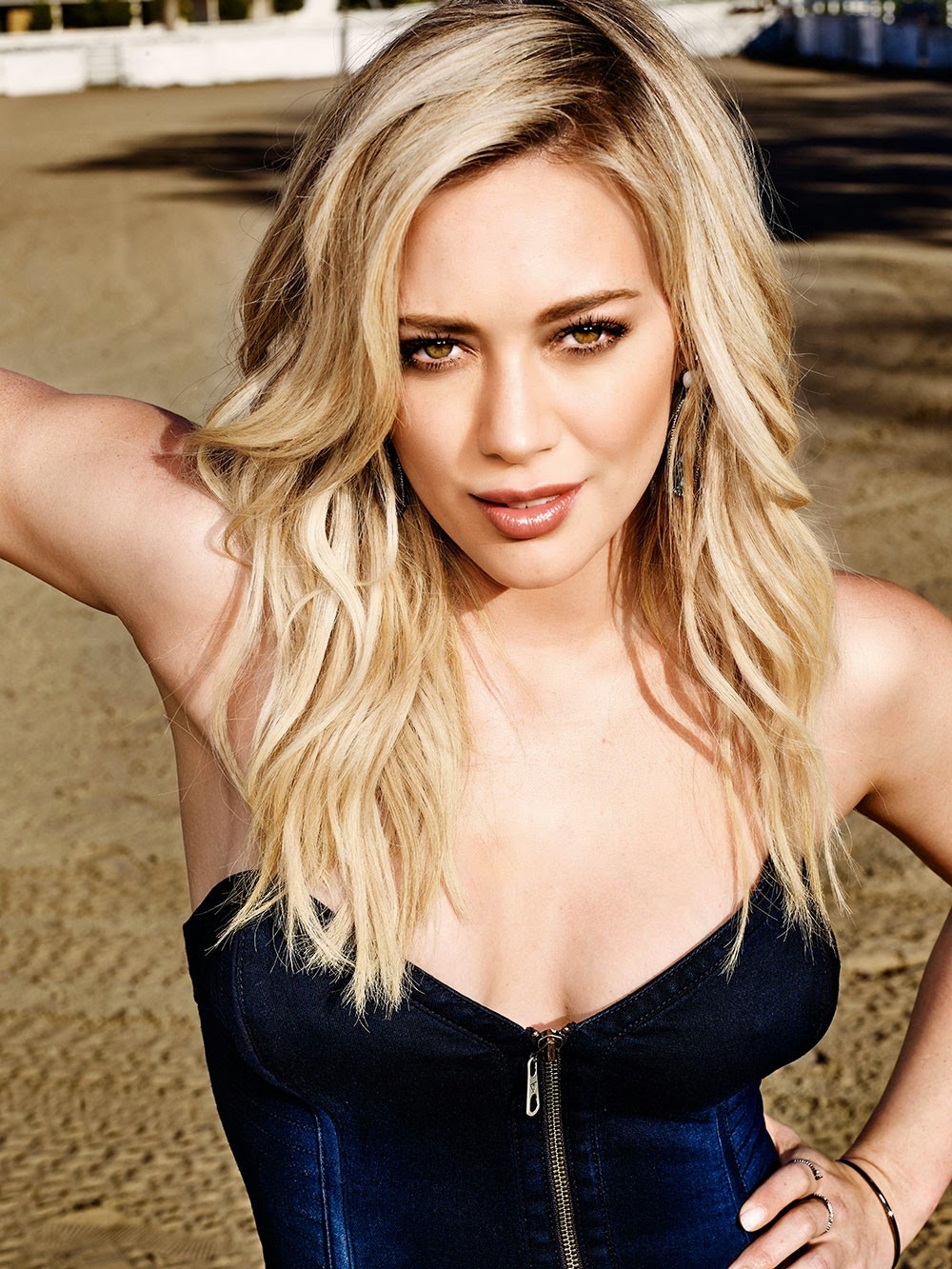 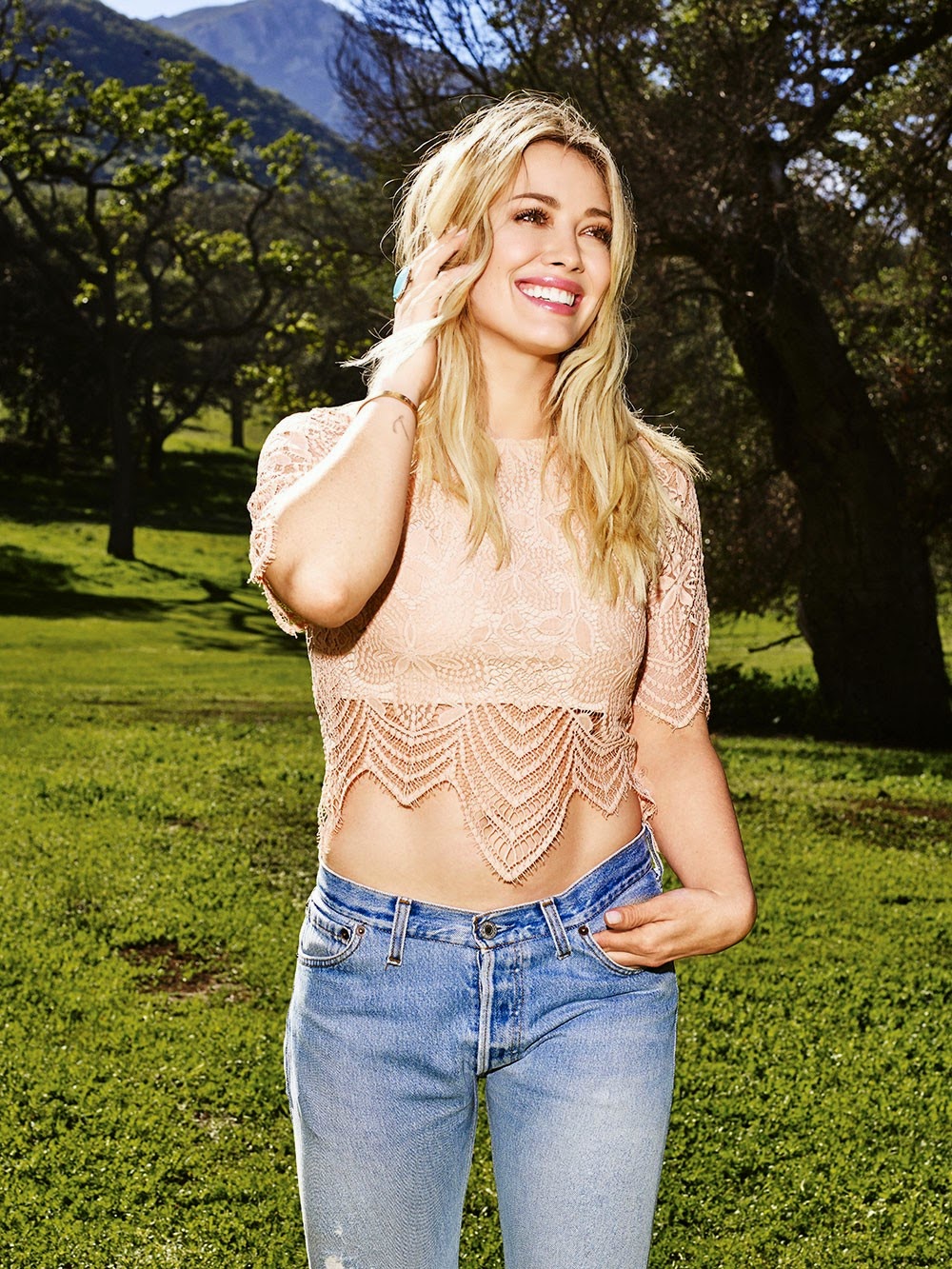 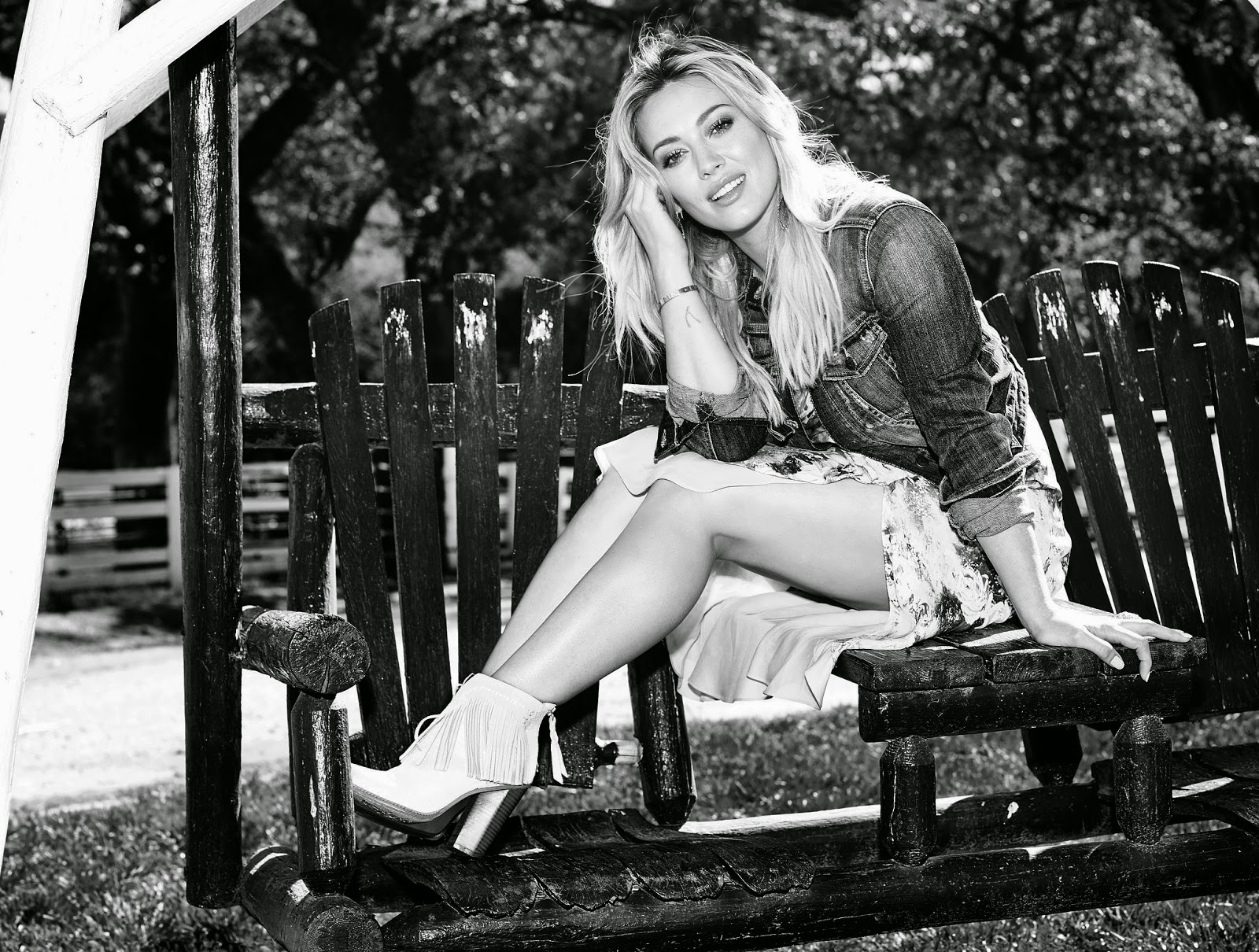 News tratta da "Variety"
One of the media business’s best-kept secrets isn’t entirely confidential after all: Netflix audience ratings. Select content companies have been turning to San Diego-based Luth Research, which has assembled a sizable panel of Netflix subscribers in the U.S. as a means of determining the most popular programs on the streaming service. An analysis shared exclusively with Variety revealed the numbers for many of Netflix’s most recently launched original series — including which new shows already seem to be challenging “House of Cards” in popularity. “Daredevil,” the first of multiple superhero dramas coming to Netflix as part of a deal with Marvel, premiered April 10, and is seeing strong sampling, with an estimated 10.7% of subscribers watching at least one episode in its first 11 days on the streaming service. 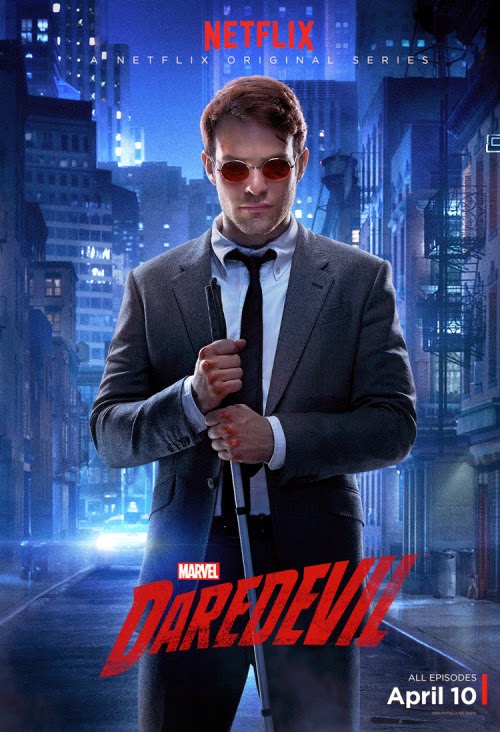 By way of comparison, the third season of “House of Cards,” which premiered Feb. 27, attracted 6.5% of subs over its first 30 days of availability. New comedy “Unbreakable Kimmy Schmidt” also bettered “Cards” in its first month (7.3%), while new drama “Bloodline” appears to be a slow starter (2.4%).
Still, any way you look at it, “House of Cards” is clearly a big attraction for Netflix. When all three seasons of the show are taken into account, the program has been the most popular series on all of Netflix in March (6.4%). Its third season was also binge-viewed more than any of the other aforementioned originals, with nearly half of subs having watched at least three episodes in a single day in the first 30 days after release.
The data was drawn from a sample of 2,500 Netflix subscribers watching via computers, tablets or smartphones. There’s one caveat: Luth Research does not yet track Netflix viewing on TVs, whether Internet-connected sets or those linked to streaming-media players or gaming consoles. Because Netflix hasn’t offered much recent insight into its audience composition across devices, it’s not easy to conclude whether TV viewers watch different programming than those watching via other platforms.
But the data provides a rare glimpse into viewing patterns on Netflix, which has frustrated many in its refusal to divulge audience data. That’s proved problematic for producers creating original programming for Netflix and for the studios that pocket billions of dollars in licensing fees from the company. 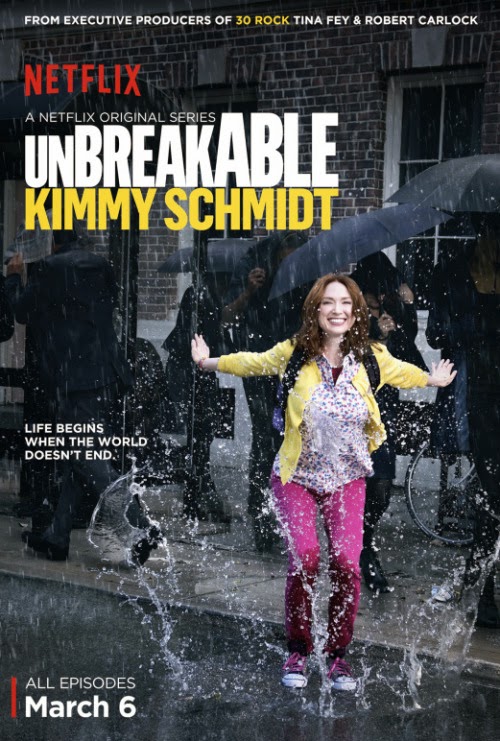 Netflix declined comment regarding the Luth findings. While the streaming giant’s execs have credited the sophistication of their extensive user data with helping inform everything from their content-acquisition strategies to audience-recommendation-engine algorithms, the company has also long held firm on its disinclination to publicize any measurement findings. Because Netflix does not carry any advertising, the company professes not to care when a subscriber watches content.
Luth Research captured the viewing behavior with its ZQ Intelligence tool, which the company bills as an “industry-first” solution capable of extracting encrypted data within Netflix’s apps. Luth can drill down to viewing patterns on an episode by episode basis including audience demographics cross-indexed with user behaviors outside of Netflix.
ZQ Intelligence hasn’t been the only third-party research source to shed light on Netflix viewing patterns. Companies tracking broadband usage like Procera Networks have been able to calculate the consumption of specific programs, but Netflix has made adjustments to thwart such efforts.
With its focus on device-based Netflix consumption, Luth Research could prove a good complement for industry research giant Nielsen, which has pledged to offer measurement of subscription VOD services over connected TVs. However, that data isn’t expected to extend to Netflix original programming.
As with Nielsen data, the Luth numbers can provide an approximation of the audience size for a given series. For instance, if 10.7% of the 40.9 million domestic subs Netflix has watched at least one episode of “Daredevil,” that would mean nearly 4.4 million tuned in over the first 11 days. The 2.3% who tuned in first day of release? 940,000 viewers.
That’s far from an exact comparison to Nielsen ratings for particular episodes, but they can provide a ballpark sense of just how many are watching top shows on Netflix on a given night or over a given period.
Luth expects to add Amazon Prime–which also doesn’t disclose its audience data–to ZQ Intelligence later this year, according to Becky Wu, senior executive VP at the company. Luth began offering ZQ Intelligence in March and has data going back to the third quarter of 2013.
Published by Leo Damerini at 17:00 Nessun commento:
Invia tramite emailPostalo sul blogCondividi su TwitterCondividi su FacebookCondividi su Pinterest
Etichette: Bloodline, Daredevil, House of Cards, L'EDICOLA DI LOU, network, NEWS, Unbreakable Kimmy Schmidt 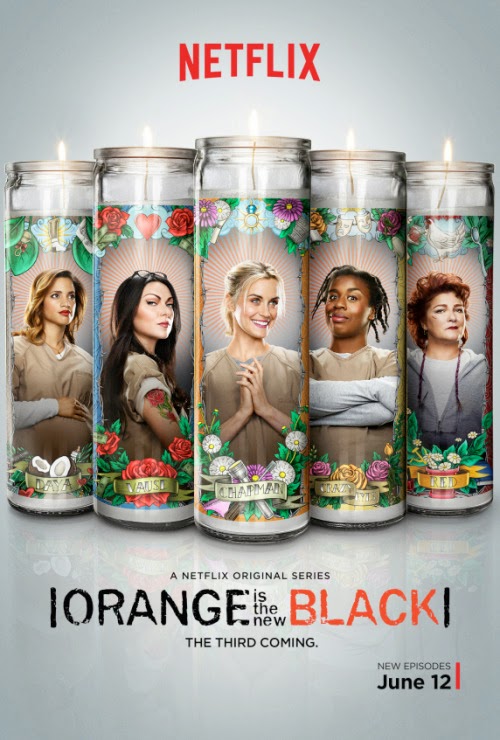 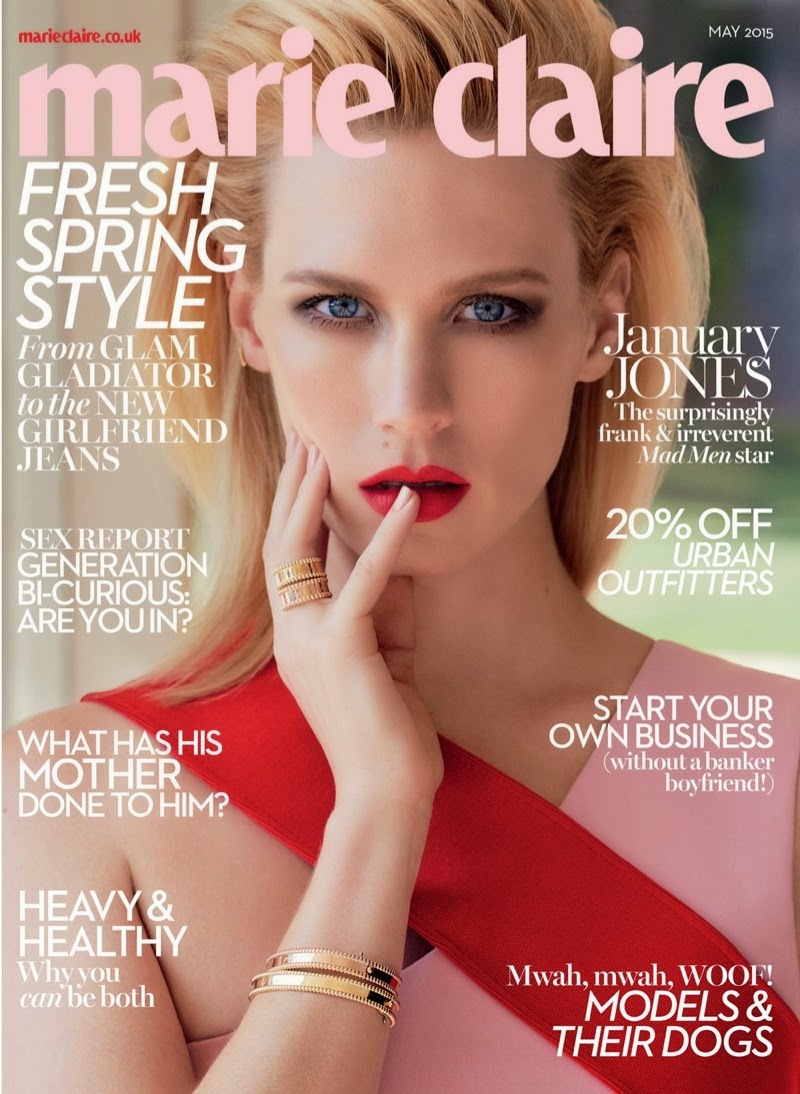 GOSSIP - Brrrrrr, January in May! La Jones di "Mad Men" illumina la cover di "Marie Claire" UK confessando la sua "insicurezza d'attrice"
January Jones dons a red lip on the cover of Marie Claire UK‘s May 2015 issue, out on newsstands now!
Here is what the Mad Men actress had to share with the mag:
On marriage: “I mean, if someone came along and was obsessed with marrying me, I would think about that. But growing up, all my family was married and never really got divorced, so marriage was a big deal, it was something you definitely did, so it’s not that I’m afraid of it.” she said before adding with a laugh, “I just don’t need the tax write-off.”
On the entertainment business: “I have yet to feel I can make a living from this. I still feel like they are going to find me out and I won’t be able to support my family in five or ten years. There is this insecurity, because this is the job where you put yourself out there to be judged, so we kind of ask for that insecurity.”
On taking placenta pills combat post-partum depression: “Whenever I felt down, I would take a placenta vitamin and feel better. I didn’t have a fork and knife and eat it like a steak, I took it with my vitamin C and B12. I don’t know if they were a placebo, but they made me feel better. People act like I’m doing some kind of witchcraft.”
For more on January, visit Marieclare.co.uk! 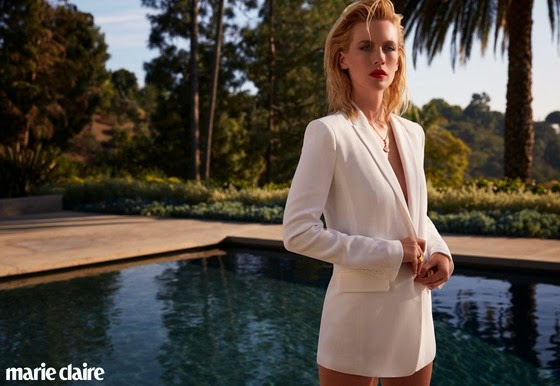 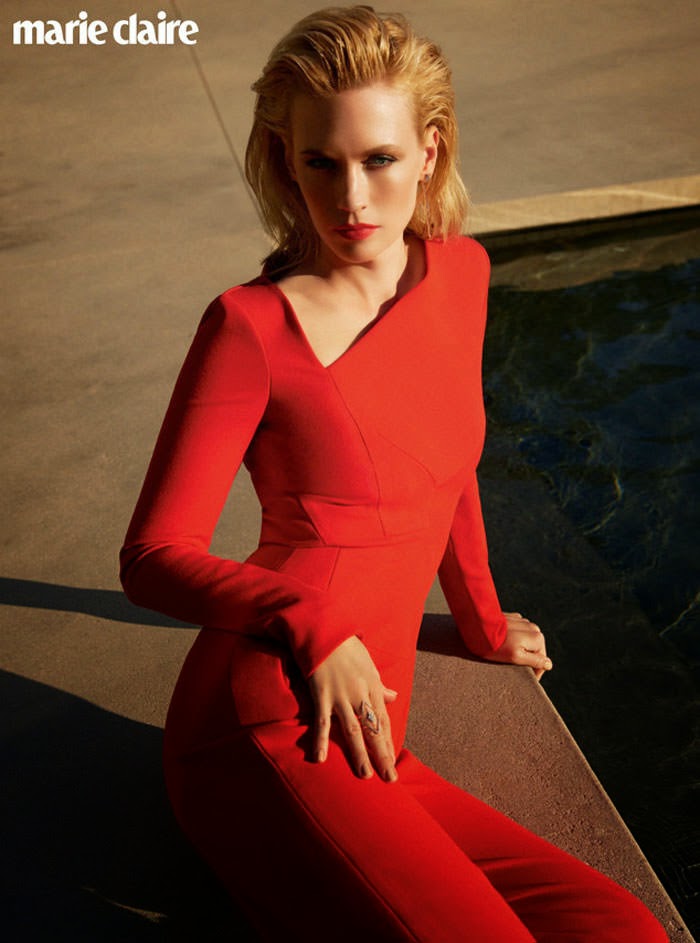 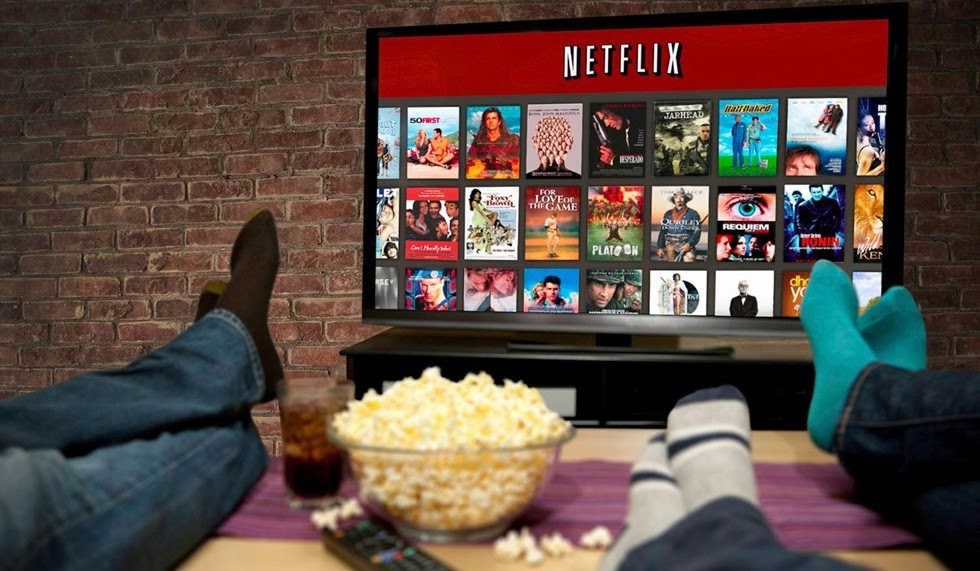 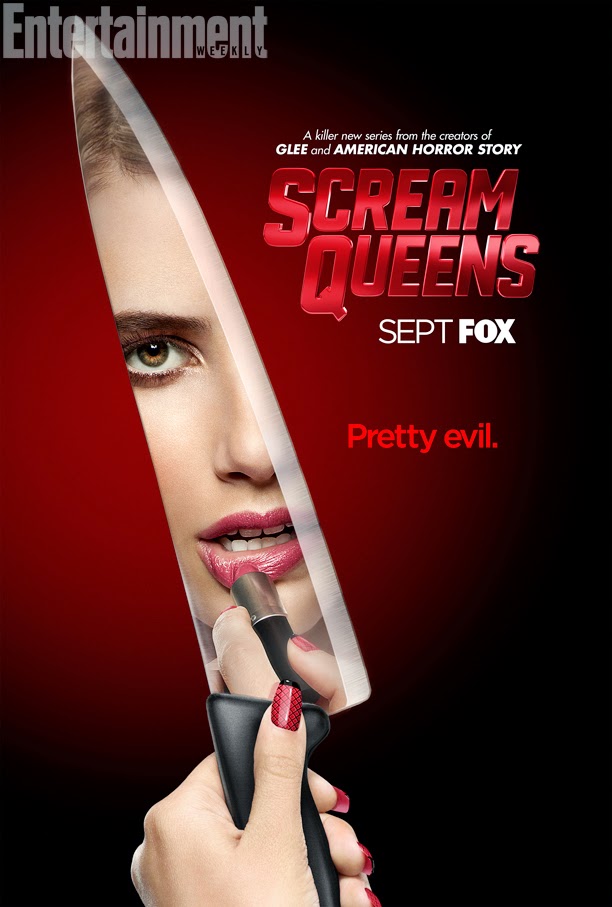 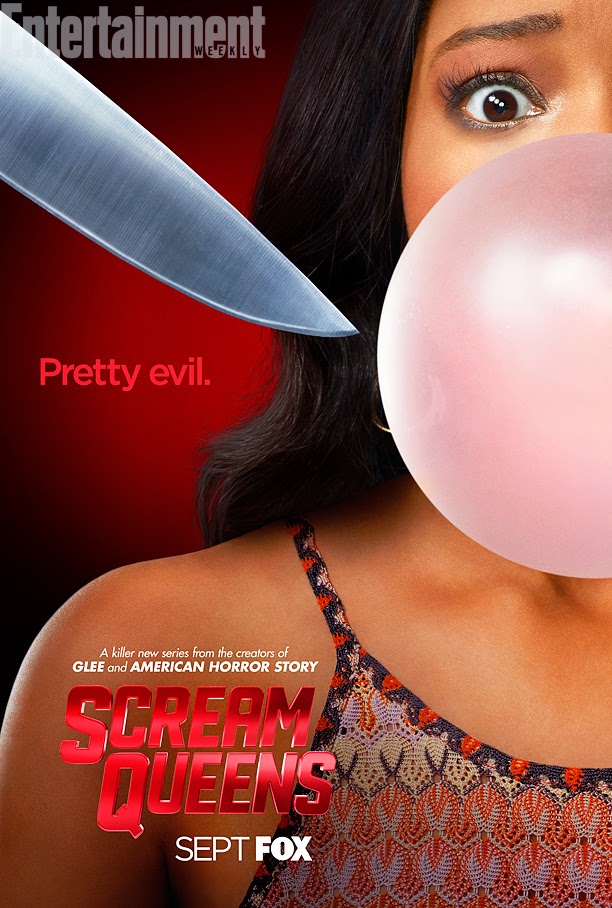 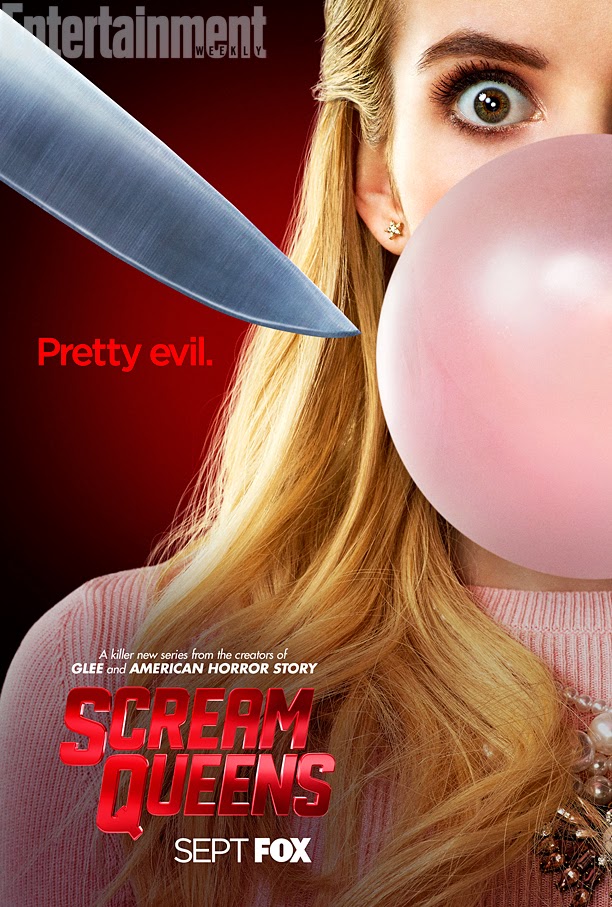 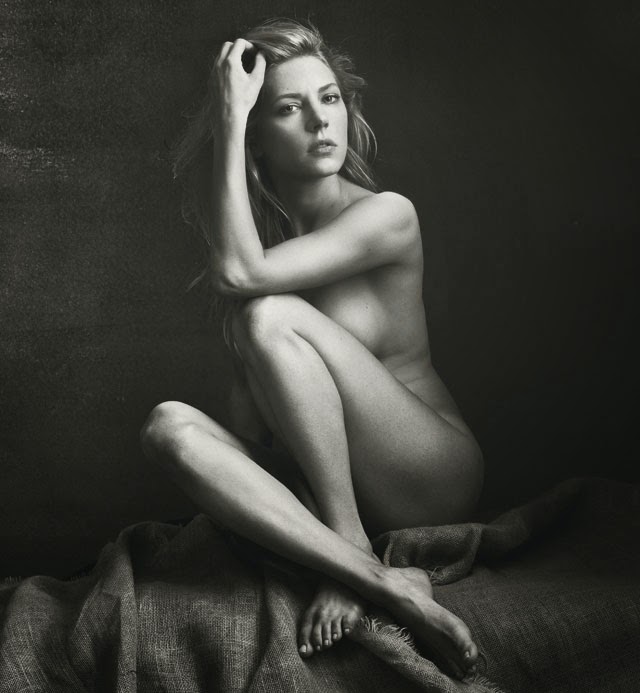 GOSSIP - "Senza vestiti mi sento più forte!". Oltre alla Cox di "OITNB", anche Katheryn Winnick di "Vikings" nuda su "Allure"
"I walked in nervous and vulnerable," says Katheryn Winnick, 37. And that's not a familiar feeling for the Vikings star, a third-degree black belt in Tae Kwon Do and licensed bodyguard. "There's a confidence that comes from knowing you can defend yourself," she says. In the end, "posing nude made me feel more free and empowered."
How did you prep for the shoot?
"I called my girlfriends and asked them to pose naked to show me what positions look good. I have a few crazy photos on my phone."
What's your nude comfort level at home?
"I'll do the dishes naked, learn my lines naked, walk around my house naked."
Have you ever been to a strip club?
"I used to go. There are incredible dancers there, and if it's in a classy way...I appreciated a woman's body when I was there."
Any parting words?
"Everybody should do this, in their home, hopefully with their significant other. If you can feel good in your own skin, why hide it?"
Published by Leo Damerini at 10:00 Nessun commento:
Invia tramite emailPostalo sul blogCondividi su TwitterCondividi su FacebookCondividi su Pinterest
Etichette: GOSSIP, Katheryn Winnick, look, sexy, toplessate, Vikings
Post più recenti Post più vecchi Home page
Iscriviti a: Post (Atom)