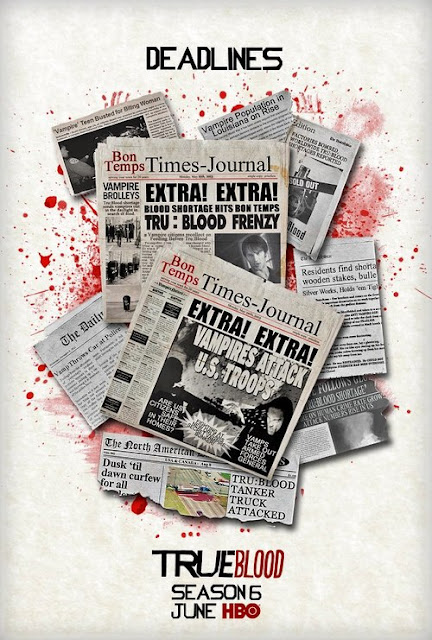 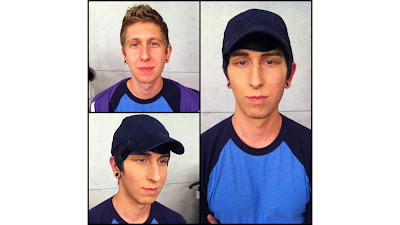 Articolo tratto da "eWalstreeter"
Known for its hardcore X-rated parodies of the horror genre—Evil Head, Fuckenstein, Re-Penetrator to name a few (links NSFW)—porn company Burning Angel just wrapped filming on its spoof of AMC's The Walking Dead. Writer/director/actress Joanna Angel published behind-the-scenes photos of the cast in makeup on her blog. Mixed in with the special effects decayed zombie flesh and bloody wounds is a shot of a caucasian man with yellow foundation and his eyes taped back to give them a slanted look. He's playing Glenn, an Asian-American. In both the comic book and the TV show Glenn is of Korean descent and played by Korean-American actor Steven Yeun.
Perhaps Angel couldn't find an Asian person to play Glenn for a number of different reasons. (Maybe Keni Styles wasn't in her budget?) Glenn is a pivotal character in The Walking Dead, so it's understandable that she couldn't cut him from the script. But if there's a complete and utter lack of Asian porn performers (doubtful), then why not just abandon the attempt to stay "racially true" to the original? It's not like the show uses Glenn's ethnicity as a plot point; it doesn't define him. You could cast anyone in the role. Angel defended her choice to put the actor in yellowface: 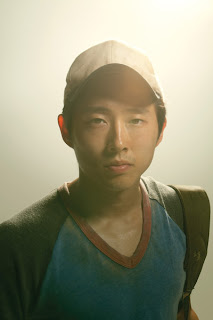 Alright, I know some of you lame asses were offended by me turning someone non-Asian into someone Asian, but Danny is an important member of the BurningAngel family and I really wanted him in this movie –- and he actually has a lot of similar features as Glenn and made the most sense to play him. Around election time, I aged Danny about 60 years and turned him into Joe Biden. In Evil Head, we gave him an 80's looking wig. I was not doing this to make fun of anyone of any race -– I did this because it was a parody. So all you over-sensitive PC people: calm down.

"I did it because it was a parody," isn't exactly a defense; ironically it's more of an explanation of why people found it offensive, as the whole meaning of "parody" is to imitate something for the purpose of ridicule.
Angel found a black actress to play the part of Katana-swinging Michonne. One has to wonder if she had been forced to cast a white actress, would she have put her in blackface? Or would that have been crossing the line? 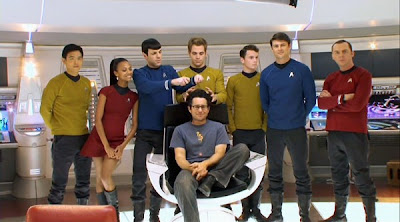 VARIETY
Il nuovo "Star Trek Into Darkness" sbanca i botteghini e arriva là, dove nessun film della saga è giunto prima
"J.J. Abrams sets his filmmaking to “stun” for “Star Trek Into Darkness,” a sequel in every respect equal or even superior to its splendid 2009 predecessor, which lovingly and cleverly rebooted Gene Roddenberry’s long-running space opera following the black hole of 2002’s “Star Trek Nemesis.” Markedly grander in scale, although never at the expense of its richly human (and half-human) characters, “Into Darkness” may not boldly go where no “Trek” adventure has gone before, but getting there is such a well-crafted, immensely pleasurable ride that it would be positively Vulcan to nitpick. Global box office cume should easily warp past the prior pic’s $385 million for this sturdy Paramount tentpole, which opens overseas May 9 before beaming down Stateside one week later.
Abrams, whose last pic was the lyrical “E.T.”/“Close Encounters” homage “Super 8,” here tips his hat to the “Indiana Jones” series, opening with a thrilling setpiece that finds Kirk (Chris Pine) and Bones (the sly, loose-limbed Karl Urban) on the run from a tribe of very angry natives on the planet Nibiru. The natives, decked out in head-to-toe clay body paint, shimmer like human ceramics as they chase the Starfleet officers through a crimson forest, the lush colors of returning d.p. Dan Mindel all but searing the screen. Meanwhile, Spock (Zachary Quinto) toils away nearby, attempting to insert a high-tech ice cube into the raging volcano that threatens to destroy Nibiru and its inhabitants — a dangerous mission that quickly goes awry, building to a classic “Trek” standoff between stubborn Vulcan logic and impulsive human emotion. 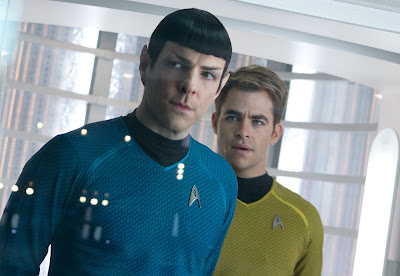 The Enterprise crew has scarcely recovered from that one when, back on Earth, a terror bombing lays waste to a top-secret Starfleet intelligence facility and brings to the fore a new galactic baddie: a rogue Starfleet officer named John Harrison (Benedict Cumberbatch) who claims credit for the attack and, after an equally brazen follow-up, hightails it deep into Klingon-controlled space. The hawkish Adm. Marcus (Peter Weller) dispatches the Enterprise in hot pursuit, with this familiar-sounding objective: Shoot first, ask questions later, and avoid starting a war with the locals. Welcome to “Star Trek Into Zero Dark Thirty.”
Only, this John Harrison is a slippery sort who, when given the chance, claims not to be the villain at all, but rather a pawn in someone else’s deadlier scheme. And for much of its running time, “Star Trek Into Darkness” makes a good guessing game out of whether this mysterious stranger with the glacial glare and bones seemingly made of steel is friend, foe or — like the “old Spock” of Abrams’ first “Trek” — a little bit of history repeating. It hardly matters, because whatever Cumberbatch is playing, he’s wonderful to watch, infusing the movie with the kind of exotic grandeur Eric Bana’s wan Romulan henchman (arguably the weakest link in the 2009 film) largely lacked. Also making her maiden “Trek” voyage is the lovely Alice Eve as an ambitious science officer who lies her way on to the Enterprise deck and makes goo-goo eyes with the good Captain. She is not, it turns out, the ship’s only stowaway.
Having previously established an alternate “Trek” timeline in which all the events of prior series and movies still happened, but aren’t necessarily doomed to recur, Abrams and returning writers Roberto Orci and Alex Kurtzman (now joined by “Lost” co-creator Damon Lindelof) here take that idea and run with it, invoking prior “Trek” lore when it suits them, freely branching off into new directions when it doesn’t. (Hell, there’s even some trouble with a tribble.) It’s a tricky business, balancing reverence with reinvention, but like the young Kirk, Abrams seems altogether more comfortable in the captain’s chair this time — not just in the large-scale action scenes, but particularly in the quieter ones, where you can sense his real investment in these characters and his confident touch with actors. 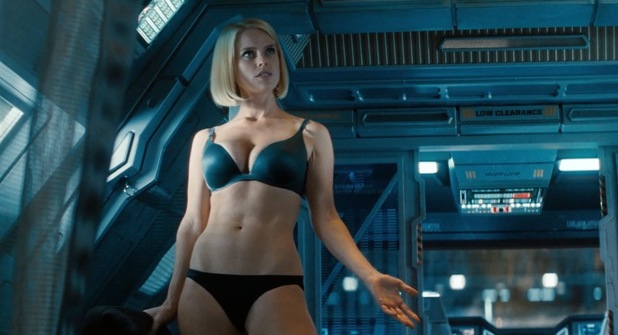 The film builds particularly well on the burgeoning Kirk-Spock friendship, with Pine showing reserves of vulnerability and doubt beneath his cocksure exterior, while Quinto adds gravitas to Spock’s eternal inner conflict — and his deepening romance with Lt. Uhura (Zoe Saldana). But make no mistake: The action, when it comes, is superbly executed, whether it’s giant vessels making mincemeat of one another, or the simpler excitements of old-fashioned hand-to-hand combat and foot chases through crowded promenades.
The best, even-numbered films in the original “Trek” film franchise were shaped by the guiding intelligence of writer-director Nicholas Meyer, who laced the Starfleet jargon with high-toned literary references and a gently self-mocking sense of humor. Abrams, too, manages to keep the mood buoyant even when the fate of the universe is hanging in the balance, more than earning his tears when he finally decides to milk them. But if Meyer’s primary references were Shakespeare, Dickens and Conan Doyle, Abrams’ are Spielberg, John Hughes and Cameron Crowe. In defiance of the self-congratulatory snark that has become de rigueur in Hollywood franchise fare, he brings a shimmering pop romanticism to “Trek’s” stalwart ideals of friendship, heroism and self-sacrifice. There’s something bold about that, indeed.
“Into Darkness” is a beautifully modulated and sustained piece of work across the board, with visual effects that seamlessly meld live-action and computer-animated elements, given further texture by old-fashioned celluloid
lensing (with 65mm Imax used for key action scenes). Post-production 3D conversion by Stereo D ranks among the best of its kind. The Enterprise has rarely looked sleeker than it does on production designer Scott Chambliss’ sets. Adding the cherry to the top of this cinematic sundae, composer Michael Giacchino’s soaring score once again revives Alexander Courage’s immortal Trek theme for the closing credits".
(Scott Foundas)
Published by Leo Damerini at 16:27 1 commento:
Invia tramite emailPostalo sul blogCondividi su TwitterCondividi su FacebookCondividi su Pinterest
Etichette: Alexander Courage, Benedict Cumberbatch, Damon Lindelof, J.J. Abrams, L'EDICOLA DI LOU, PICCOLO GRANDE SCHERMO, Star Trek, Zachary Quinto
GOSSIP - Black magic women! Jennifer Morrison and Emmy Rossum at Billboard Music Awards 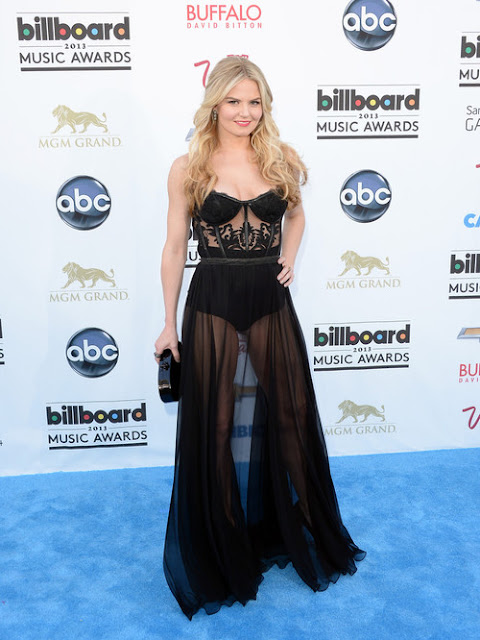 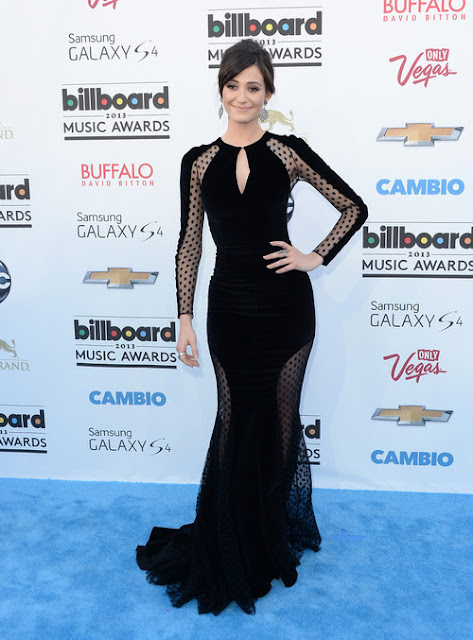 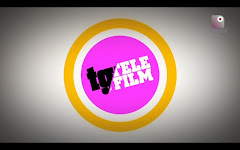